Tai Tai is a term that everyone who has lived in HK for a while is familiar with. It’s a local, slightly disparaging term for ladies who live a life of leisure thanks to their wealthy husbands. As happens often in a city of expats, the trailing spouses (in this post, I’m only talking of the women) don’t get jobs as easily and so decide to take some much needed time off work. In a new city, the most important thing is to build a new social circle and the first few years are spent in a flurry of socialising – leisurely lunches, bargain and brand hunting, foot massage with friends and wild weekends at Lan Kwai Fong. In a few years, those who have kids have found a great school-play date routine for them  and now start looking to reinvent themselves.

Most expat wives are lucky that they don’t need to work if they don’t want to. Though HK is an expensive city, expat packages are good for the most part. Some choose to switch careers completely and take up careers that can be taken up in most parts of the world – like teaching English as a foreign language. Others choose to go back to the same kind of work but find that they have lost the drive to compete and keep up with the long hours, so instead choose administrative and customer service roles. And then there’s a large majority who decide to follow their hearts and risk it all by turning entrepreneur. The fields are wide and varied. Some turn a hobby into a passion project into a niche business. Others import specialties from their home country or a country they have close ties with into HK. Others look around and look for specialised services that an ever changing expat population is always in need of. And yet others, make products and offer services that target children and turn sensible, practical women into quivering pieces of spending jelly, unable to resist their child’s tears, tantrums or what’s even worse, stoic sighs.

So what happens when a ‘tai tai’ sets up shop? She markets herself to the people she knows. The sisterhood is strong and so she gets a steady stream of customers. Very soon, one of them sets up shop as well. Now it’s her turn to lend support and so there is a solidarity buy. And thus, is born an intricate web of symbiotic sisterhood spending – a chain so complex that it boggles the mind of the most astute multi level marketer. Avon, Amway and Young Living could take a leaf out of the HK Tai Tai network. Even if a tai tai is in HK for a fleeting period of time, the bonds she makes here will last the test of time.

Husbands who are supportive of their wives’ entrepreneurial ventures watch with pride as they see stocks getting depleted fast or their wives accepting orders on the phone. Soon though, they wonder why it doesn’t reflect in the household income. So they helpfully sit down with their wives to help balance accounts at the end of the month. Most of them are finance whizzes with top jobs in leading banks (if in HK, you can throw a stone and hit an HSBCer). And yet, when face to face with the power of the tai tai network, they retire hurt and accept defeat. There’s no way they will ever be able to tally this phenomenon.

Wearing a scarf I bought from a friend, carrying a clutch I bought from another friend and sporting a haircut given to me by yet another! My HK sisterhood! 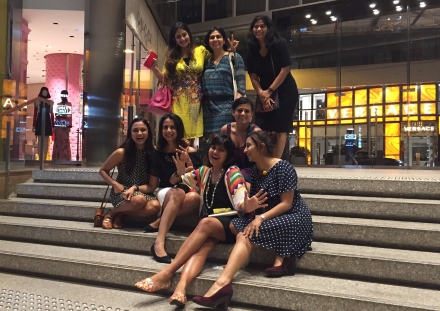 Me and my girl gang!