I’m currently fostering a dog at our home. I say ‘I’ honestly because it’s only me involved with caring for him. My kids adore him, but they are too young to help and my husband has vowed not to be a part of my harebrained schemes, so is keeping his distance and trying desperately not to fall in love. I say ‘fostering’ rather dishonestly though. My kids and I know he isn’t going back to the shelter, but my husband, always deliciously vague and absent-minded, hasn’t realised that he has already overstayed his foster period!

A friend who was over at my place recently was in splits seeing me fuss over the dog. “You treat him like a human!!!”

Well, I do believe that dogs come so packed with personality and quirks that it’s hard to see them as anything but! They can’t speak Humanese but they know exactly how to communicate with us with their melting looks, raised heckles and out-of-control wagging.

My first dog, for instance, was a con artist. He was already old by the time I was able and responsible enough to be involved in taking care of him. And those who say you can’t teach an old dog new tricks, hadn’t met Terry. From what I have heard, he began life as a fairly stupid dog – all brawn and little brain. But when he was 10, a routine cough turned into an infection and he burst a blood vessel in his ears and soon lost hearing. I believe that as one of his senses left him, he actually got gifted with sense. Terry milked his ‘no hearing’ to his advantage. He didn’t hear any instructions when convenient and for an old dog, we were always surprised by how quickly he moved to forbidden fruit! I think he had everyone fooled with his weak, doddering image. He didn’t fool me though. I think he chose to co-opt me into his con game, knowing that I was never going to rat him out. For instance, when the lift in the building stopped working, he would refuse to walk up the stairs. As a skinny seven-year old, I would him carry him up two floors, huffing and puffing all the way. As we neared the house, when I put him down, he would give himself a quick shake and step into his performer persona and then stumble and trip into the house, looking completely exhausted. Needless to say, he got fussed over!

William was completely different. He belonged to one of the richest families in Pune where he was fed organic, shredded chicken everyday. But he didn’t get any love or affection as the owners were always too busy in their own socialite world. William started coming to our colony, full of children willing to dote on him. After a few weeks, William decided to trade in the fancy diet for taking up permanent residence in the colony and in the hearts of 10 kids. He was a smart cookie. He worked out what he got fed at different houses and soon settled into his own routine. When he craved omelettes, he came to my house, on days when he just wanted milk and bread, he visited another house. Quite like a lover who had been cheated on once, William had a suspicious nature. If any of us ever touched another dog, he sniffed us jealously and turned his back to us and would refuse to come to our home even for food. Talk about (not) being in the doghouse!

Then there was Milo. Milo was thrown into our colony from the neighbouring slum settlement, when he was just a puppy.

As he lay there, scared and whimpering, he quickly worked out that William was top dog and he would be wise to learn from him. He didn’t have William’s regal looks and upbringing and found it less easy to be accepted by the people of the colony, except for the most devoted dog-lovers. William accepted him as part of his pack, rather reluctantly, and barked out his commands to Milo who followed with unwavering devotion, the way only dogs can. Milo was a born and bred streetie and he had steel running through his muscles. As he grew bigger and stronger, Milo’s territorial instinct kicked in and he started ‘guarding’ our colony by chasing away milkmen and newspaper boys. The people of the colony objected and Milo was in danger of being put down. A few of us found a neighbour who owned a factory and convinced him that he needed a guard dog. Milo went to live there and very soon, he put William’s lessons to good use and became the leader of the pack there. When I visited him last, he was using his natural instincts and build to keep slum-dwellers from squatting on the factory premises. Divine or canine justice, I would think!

Some years ago, I adopted Barista from a coffee shop of the same name. Barista is more like a cafe frappe´, rather than a hot cappuccino. Always playing it cool, pretending he is so much more dignified than me.

So when I hug him and kiss him and roll on the floor with him, he endures these excesses of affection with stoic, suffering silence. Don’t let this fool you. Barista is and was insanely obsessed with me. If I ever left him alone at home, he would wreck it. I used to spend thousands of rupees Barista-proofing each rented apartment I moved into as I figured out how to deal with a dog who suffered acute separation anxiety when I wasn’t around and lip-curling contempt for me when I was! My favourite explanation of his split-personality-like behaviour came from a friend of mine. That was the time that a film called PK had released in India. It was about an alien lost in India who was desperate to get back home, but had lost the device he needed to communicate with his planet. This friend insisted that every time I left the house, Barista was wrecking it in his effort to find the device to get back home. Because with his no-bark, no-lick, no-expression policy, he was clearly not canine. Just a poor lost alien, desperate to escape a dangerously besotted human!

And now there’s Charlie. I have never been a small dog person. I like the beauty and magnificence of the bigger breeds. I picked Charlie up from the shelter because at a mere 7 kgs, I thought he would be easy to take care of. A good way to ease my kids and husband into the world of dog-caring. Turns out, I may have picked the I may have picked the smallest dog, but with the biggest personality. 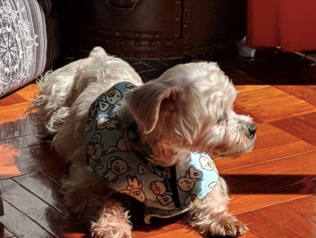 Charlie has clearly never taken a look at the mirror because he believes that he is more bad-ass than any dog out there. Walking him is a nightmare because he tears down the street pulling someone 10 times his weight with ease. In the first two weeks of fostering him, I’ve signed up for a dog training course and am reading Cesar Millan’s books cover to cover, but nothing I’m doing seems to work. While I don’t mind the run around (I definitely could do with the workout!), I am really afraid of the fights he picks with other dogs. Thankfully, most of them ignore him because he looks like a slightly oversized rat. My first dog, Terry, was a bull terrier, supposedly called the gladiator of the canine species though I never saw any signs of it. Charlie, unfortunately seems to have taken on the gladiator persona. Ah well, I guess I may have to rename him when we formally adopt him. I’m thinking of Dufferus Maximus.